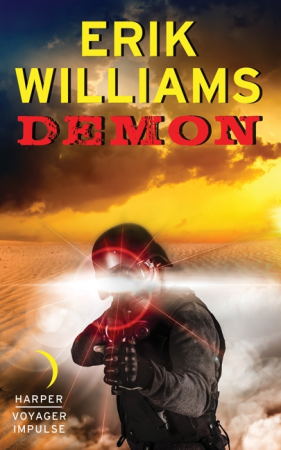 Tired clichés about judging books by their cover aside, Erik Williams’ Demon isn’t the sort of book that I would have normally pulled off the shelf for more than thirty seconds. While I’m not the type to judge a book by its cover art (though I will judge cover art, and in doing so point out there are no laser scoped storm troopers in this novel) I am one to put stock in how a novel sells itslef on Amazon/on the inside jacket. Here’s a sample.

“Mike Caldwell is a CIA assassin who thinks he’s finally got a real case to work on. At a remote construction site in Iraq, something deadly and dangerous has been unearthed, and Mike believes he’s dealing with a powerful pathogen that turns the infected into primal killing machines. The truth, however, is far worse.

The ancient prison of the fallen angel Semyaza has been uncovered, and for the first time in thousands of years he is free to roam the earth, possessing the bodies of the humans he hates…Now Mike is on Semyaza’s trail, hunting a demon whose mere presence turns every living thing near it into a weapon of mass destruction…”

I think you see where I’m going with this. For that reason, I almost declined to review Demon on account of rule number 6, “Do not accept for review a book you are predisposed to dislike.” In truth, my decision to review the book came down to a single question: did the author write the jacket copy, or did the publisher put it together in an attempt to be salacious? After finishing Demon, and thoroughly enjoying the experience, I suspect the latter.

Much of this book surprised me. First and foremost, its setting of post-war Iraq isn’t presented as a moral playground with a protagonist acting as the archetypal, “America, Fuck Yeah” hero. It’s a place, no better and worse than any other contemporary setting for a novel – albeit one that is more complicated and plagued with narrative peril. The author’s descriptions of Basra and the surrounding hinterland, though underwritten by the neo-colonial adventure of aggressive American foreign policy, don’t carry with them any presumption of prejudice or moral righteousness. Everything about the characters and setting, including a large swath set aboard an Iraqi oil tanker, and especially the part set aboard a US naval vessel, seems come by honestly (Williams is a former naval officer) and without agenda.

Despite one assassination scene and one full-bore gun fight, which itself is smart enough to talk about blown ear drums as a result of blasting away like Rambo, Demon largely presents itself as a dialogue on personal accountability. Both the corporeal and supernatural elements of the story orbit this common point. Mike’s conflict is an internal one as he attempts to parse being a professional killer while being on the side of the angels – so to speak. In contrast, Samyaza blames everyone but himself for the actions he took during Lucifer’s rebellion against the throne of the high heavens. The narrative serves to plumb the depths of both characters until such time as they, together, are able to reconcile themselves with the world. Thus, the demon of Demon is not Samyaza, but the more intangible demon of self-doubt.

With respect to Samyaza and Uriel, a Seraphim and hand of the divine author who steers the plot where it needs to go, I couldn’t help but feel that the novel relied a little too heavily on Christian mythology (contradictions included) as written. I fully acknowledge my thoughts on that point probably have more to do with the fact that I think the best parts of the bible were written by Dante Alighieri and the various writers of the Diablo trilogy. I don’t want to open a theological can of worms, but hear me out for a moment.

God, as presented within his novel, must be a sadist. Consider the implications of a creator making angels outside of the divine image, thus absent the free will of humans, who are made in said divine image. For want of free will, the angels must come pre-programmed. Their fates should be known to an all seeing divinity. Thus, Lucifer’s rebellion and Samyaza’s millennia of solitary confinement are the result of teleological predestination. I might be willing to accept that at face value if I was a particularly faithful person; alas I am a critic. Therefore, god seems like a bit of a jerk toward a character I came to quite enjoy reading.

And before you, gentle reader, accuse me of being picky or particularly sacrilegious, consider the fact that I’m able to get stuck in the weeds of philosophy and spirituality in a novel that has a stand-in for Cobra Commander on the cover. That alone should speak volumes about Mr. Williams writing. Demon managed to subvert all of my expectations, unexpectedly drawing me via a depth in the characters and the genuine sense of place conveyed through the prose. I look forward to seeing what he does with the sequel.