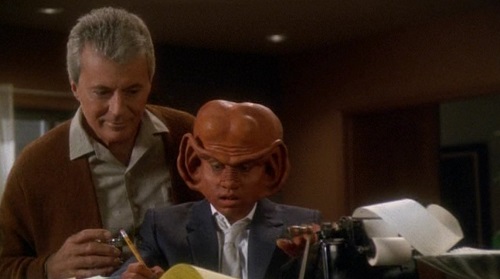 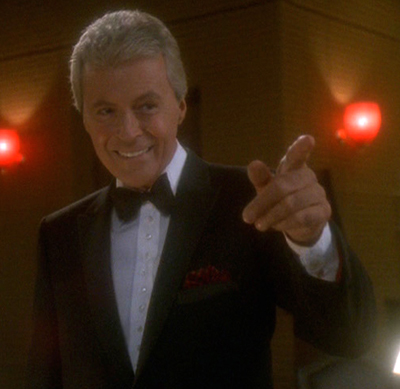 Welcome back. In the first part of this series I looked at the absence of contemporary art and culture in Star Trek TOS and TNG. Today, we’ll finish with a review of DS9, Voyager, and (sigh) Enterprise.

Some of you might be thinking that Deep Space Nine proves me wrong about a lack of contemporary culture in Star Trek.

Jake Sisko, for the win, right?

Ask yourself this, what does Jake ever publish? In The Visitor we learn that Jake – playing a Salinger-type recluse – published two books then quit writing because of his obsession with his ghost dad. I submit that since that timeline didn’t happen, those books were never written, and thus don’t count. Instead, our relationship with Jake as a writer is through his work with the Federation News Service.

Say those last three words out loud. Now replace “Federation” with “(Harper) Government of Canada” and see how it sounds. Did you throw up a little in your mouth?

At some point between Voyager’s trip to the 1990s – absent any mention of the Eugenics War – and 2373, the New York Times, The Guardian, The Times of London, the Toronto Star, The Economist, The Atlantic, and every other thoughtful media outlet either disappeared or became irrelevant compared to the broadcast power of the Federation News Service.

Setting that aside for a moment, DS9’s other contributions to Star Trek’s internal culture include the following.

Even on the raggedy edge of Federation space, on a space station that is open to pretty much all the races of the Alpha Quadrant as a port of call, humans show no sign of having a contemporary culture that extends beyond nostalgia for Earth’s past.

There’s also a strikingly prudish and anti-sex attitude emanating from anybody in Starfleet with respect to Quark’s repertoire of holosuite erotica. Quark is seen as a degenerate for offering programs that cater to the notion that there’s a partition between sex for reproduction and sex for recreation. And before somebody tells me that DS9 is a product of its time, considering how attitudes toward sex changed between the 1960s and 1990s. By that measure we might expect that the 2370s to look something like Logan’s Run. DS9 is something of a two-for; it continues the tradition of eschewing an actual contemporary culture for worshipping the 20th century, and as a bonus it casts a very puritanical light over humanity in the 24th century.

As much as it pains me to say this, sometimes Voyager isn’t the worst Star Trek of them all. Mind you, there is some very terrible story-telling within Voyager’s repertoire. Threshold’s attempt to tell a story about what happens when you travel at warp 10 (spoilers, you have sex with the captain and mutate into a lizard monster) was particularly odious.

One of the series high water marks, in my humble estimation, was Voyager’s season seven episode, Author, Author. While the episode was principally about exploring something non-human (The Doctor) through a human lens, it also gave a rare insight into some contemporary culture in Star Trek: The Doctor’s Photons be Free holonovel.

The holonovel is the Doctor’s attempt to try and shed a light on the fact that sentient holograms are a source of slave labour in the Federation. The Doctor’s work presents art in Star Trek as we see it now: a mechanism for presenting commentary on the contemporary world.

What do we see from the rest of the crew in terms of art?

No one would expect a ship 70,000 light years from home to have access to contemporary culture, but the crew’s choice of filler material is rather telling.

Now we’re scraping the bottom of the barrel. Enterprise is the Ralph Wiggum of Star Trek. Even as it wallowed in the cast away plot lines of its betters, the series managed to hold fast to the idea of contemporary 22nd century culture as a nod to the 20th century.

The ship’s weekly movie night was a reasonably clever way of bringing the crew together in off-duty hours. It was also an opportunity to provide viewers with some subtle insights into the world of the near-future. Alas, movie night subjected the crew to mid-20th century black and white movies – and one reference to movie night as The Great Escape. Only in the fourth season episode Home do we get a glimmer of contemporary culture with a throwaway line of dialogue mentioning a theatrical release of “another World War Three epic.”

Perhaps the big one happened between the 2150s and the 2260s, taking all of Hollywood and the very idea of film as a narrative device with it.

Enterprise was a cultural wasteland. Non-technical reading for the crew seems limited to Vulcan philosophy. Music continues its trend of being rooted in the 19th and 20th century. The sport de jour is water polo, for some stupid reason. Despite having tablet computers galore, the crew of the NX-01 can’t seem to find a copy of Candy Crush for love or money.

What’s the Point of It All?

Why have I put more than two thousand words to paper exploring the fake culture of a made up civilization? In part because it’s important to take a critical eye to the things we like.

Though Star Trek’s writers’ probably never intended to create a world bereft of its own culture, they none the less did so. The Federation’s fixation on its past is comparable to any oppressive state that wants to focus on its past rather than its terrible present, for fear of sowing dissent among the masses. In turn, this presents a vision of the future that an audience might internalize, consciously or otherwise, as ideal. They might come to see 100% state employment and the end of private property in a post-monetary society as a positive thing. They might not see the value of an independent press as a way of keeping the powers that be in check. They might think that art is limited to history, portraiture, and decorative geegaws when it should be used as mechanism for empowerment, especially among people whose voices are marginalized.

Star Trek presented the future not as a work-in-progress, but as an ideal. Captain Sisko once referred to Earth as paradise. It’s clear, however, that the Federation is far from paradise. There is still discrimination against holographic life, which began showing the capacity for true sentience in TNG with the Moriarty program. Organized crime from the Orion Syndicate reaches into the Federation. Starfleet created its own enemy in the Maquis through a treaty with the Cardassians – a treaty used eminent domain to expropriate land from Federation citizens. There’s every reason to believe that the Federation should be rich with counter-cultural, or at least socially critical art. Yet we never see it.

When placed under a microscope, the Federation is a vision of the future that is at best shallow and simplistic and at worst overtly oppressive. That’s why I wrote this piece. Because as contemporary myths go, we can do better.