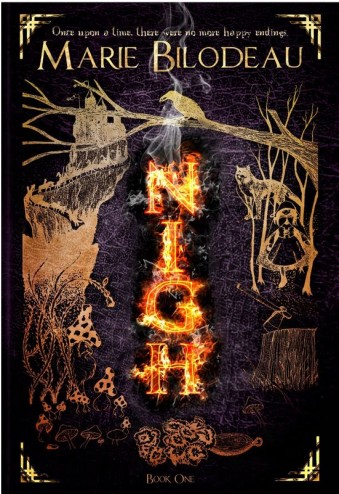 Ages ago, I said something – seemingly innocuous – about how Marie Bilodeau’s writing style would lend itself to a serialized novel. Imagine my surprise when the acknowledgements of Nigh’s first volume called me out, by name, for that recommendation.

“Adam Shaftoe…This is on you!”

A portent to be sure, and while it’s not usually my role to play the Haruspex, I dare say that Nigh’s first installment bodes simultaneously fantastic and terrifying for the balance of the novel.

Even though Nigh’s inaugural entry only amounts to sixty pages (or so my Kindle tells me) it has already managed to throw this reader for a few loops. Case in point: the balance of the preamble mentions faeries. Naturally, I braced for fantasy. The novel opens, however, with an introduction to Alva Taverner, an automotive mechanic and amateur horologist. And as quickly as I settled in for day one of Shadowrun, an all-consuming mist shrouded the small town of Lindsay, Ontario, and Nigh turned my thoughts toward Stephen King.

The stopover in King’s territory, however, is a brief one. Rather than housing monsters, the mist itself is a monster. It smashes cars, manifests soul reaving avatars, and twists the terrain into a series of organic bear traps. Whatever presumptions a reader might have about Nigh being a “faerie story” of the pedestrian variety should immediately but locked in an iron box and cast into the sea. In but a turn of the page, the tedium of the small town gives way to the sort of brutality one would expect to find in the pages of an Andrezj Sapkowski Witcher novel.

Bilodeau also seems intent on keeping Nigh reasonably far removed from the usual (i.e. boring) high-fantasy tropes. Nigh’s protagonist may be of exceptional lineage, but she isn’t about to go on a Skywalker-esque journey of self-discovery. Granted there’s a mystery to unravel, but there’s no reason to believe Alva and her over-sized wrench aren’t capable of meeting the challenge before them. The absence of the heroic cycle’s prelude further suggests Nigh will more likely follow the pattern of a survival story; in this case it’s Robert Kirkman meets the Brothers Grimm.

I think it’s also fair to presume there will be a considerable environmental theme to the story. As I mentioned before, the violent nature of Nigh’s apocalypse is decidedly aimed at the edifice of human civilization. Cars are smashed under the fist of an impossibly powerful force. This same force splits and shatters roads as if they were made of cardboard. At one point, a car gets knocked off a jack, bisecting an unwary mechanic in the process. The mist rages against the humanity’s products, but people, save for the aforementioned mechanic, appear as fodder to be consumed by the mist.

Similarly, the eventual weaponization of the natural world strikes as an immediate contrast to the professional background of the central players. Consider how mechanics and watchmakers labour to maintain the artificial systems that make civilization function. In the case of watch makers, they go so far as to impose an absolute order on nature through the conscious and exacting measurement of time. I can’t imagine these pieces of character development being coincidental to the apocalypse.

While there’s much more of Nigh to come, its introduction is nothing short of fantastic. Despite Marie Bilodeau’s existing and well-deserved reputation for doing terrible things to her characters, Nigh reflects a darker turn from her previous books. Where those works were a slow burn to various horrors and cruelties, Nigh offers no such gentle warm-up. Red shirts are introduced, humanized, and then mercilessly killed in a way that would make George R. R. Martin raise a concerned eyebrow. Though thematically appropriate, here’s to hoping we don’t have to wait until spring for Nigh’s second installment.