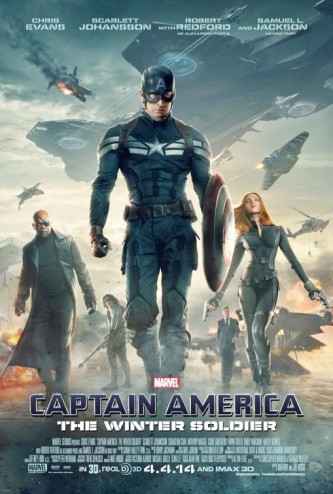 There comes a point when a man must ask himself, “is there something wrong with me?” There’s a looming sense of dread hanging over my desk as I write these words. Once again, I’m arguing against what everybody else is saying, and I’m not doing it as troll, either. Truth be told, I wanted to like Captain America: The Winter Soldier, but the script seems so woefully deficient, chalk-a-block with rough patches and gun battles in lieu of narrative or character development, that I found the entire proceedings to be quantifiably poor – perhaps just-below-average if I’m going to be very charitable.

It seems to me, Cap 2 really wants to be Cold War porn in the vein of The Hunt for Red October. There’s a palpable desperation in the way the writing tries to frame this story as a thinking man’s action movie: Steve Rogers as Jack Ryan – albeit with super powers – working to stop a form of technology that will reinvent war. It won’t do for Cap to simply beat up his enemies; he has to follow a series of breadcrumbs to unravel a mystery. If Cap 2 offered a clear consequence and tangible foe from the outset (e.g. a missing Russian nuclear sub destabilizing US-Soviet detente) it might work. Alas, the Marvel universe exists in parallel with our own universe, which means the only contemporary war this movie can mobilize, while speaking to its North American audience, is the War on Terror.

Read this loud and clear, The War on Terror is not sexy. The War on Terror is a weird, sticky, morass of short-sighted ideas married with the sort of xenophobia and jingoism that would have made Benjamin Disraeli turn a shade of red. Where a character like Black Widow is easily suited to such a world, it is utterly alien to Captain America. This brings me to my first major let-down with The Winter Soldier, this should have been Black Widow’s movie. Full stop.

Steve Rogers, as the living embodiment of Roosevelt’s America, is a beacon of idealism. Since idealism doesn’t compromise, there’s little room for a moral conflict on the part of the idealistic character. This makes for an overly-simplistic “good versus bad” dichotomy and, in turn, reduces Steve Rogers into a very shallow character amid a movie that’s trying to dig into his character. Black Widow, however, comes from such a dark place that she – and the audience – might not reject being tempted into HYDRA’s web of intrigue.

Returning to the hero at hand, it seems plain enough that Cap’s writing committee recognized the need to add some depth to their leading man, lest he start coming off like Superman. This explains the decision to backfill his inner struggle after Bucky Barnes’ reveal as the Winter Soldier. It’s not a bad gambit, and it might have worked if the audience had a reason to care about Bucky Barnes.

To my recollection, Bucky was merely along for the ride in Captain America: The First Avenger. The scenes that would have developed his character were glossed over during the montage of Cap’s campaign against HYDRA. More to the point, having flashback-Bucky tell pre-serum Steve he isn’t alone strikes as pretty tone deaf to what Cap’s been through. Cap had the Howling Commandos for the first movie, and he had the Avengers in The Avengers. Now he has Black Widow and Falcon. He’s not exactly Bruce Banner in terms of isolating himself from the world.  Say nothing for Cap’s stranger in a strange land culture shock vanishing to the point he can now riff dialogue from Wargames with Black Widow. For the record, Wargames came out a year before Black Widow’s movie-canon birthday. I guess she had plenty of time to be nostalgic in the KGB…even though the Soviet Union fell when she was 7. Pretty sloppy with the details there, Marvel.

This leaves the movie stuck between being a rehash of the “optimism versus pragmatism” trope and a generic superhero movie, which traded mustache twirling in its villains for homo-erotic whispering. The dangerous (i.e. interesting) option would have been to leave HYDRA completely out of this movie. Let SHIELD compromise its principles on its own. Turn Maria Hill into the villainess who wants to avenge Nick Fury’s death from the helm of a Helicarrier. Let Captain America find himself on the wrong side of the line without the Nazi-turned-Illuminati bullshit.

What remains of all these missed opportunities is a movie whose story is so messy and convoluted that the bad guys’ goal only becomes clear in the third act. Moreover, it takes an hour for The Winter Soldier to dispense with the preliminaries. It then comes as no surprise when the heroes’ journey through the conspiracy within SHIELD is so linear as to be a game of connect the dots. There are no moments where Cap and Black Widow have to look at each other and go, “Well I have no idea what to do next.” In those occasions, where the characters might otherwise have to be smart and figure things out, there’s always a disposable character standing by to offer up necessary exposition and scene bridging. In a nutshell, Captain America: The Winter Soldier feels like filler. Filler built on more filler; it’s filler Inception. It’s meant to get us from one Avengers movie to the next, because god forbid people have to wait a few years between movies.

I give it three grumpy cats out of five, and may Galactus have mercy on my soul.