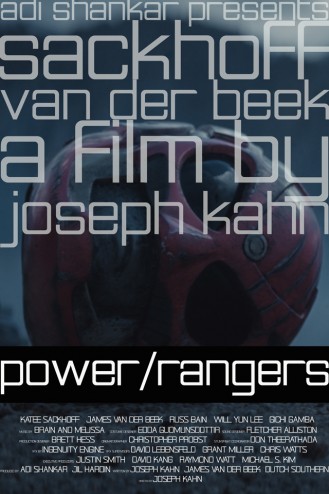 I find myself torn between talking about Adi Shankar’s Power/Rangers bootleg, a hard-scrabble alternate ending to Mighty Morphin’ Power Rangers/Power Rangers Zeo, or devoting a few words to unpacking the outrage against the fan-film. Perhaps I shall try to do both, and in doing so shame the powers who would see Power/Rangers pulled from the internet.

On the one hand, it is god damned hilarious to see the internet exploding with butthurt about Power/Rangers. I’ve seen no shortage of people railing against how this ten minute fan-film is ruining their childhood. Who knew that watching something new had the power to ret-con a person’s memories? I must have this technology.

What’s more fantastic is Jason David Frank, the former green power ranger, taking to the internet to speak out against this one-off production.

“I know there’s a lot of fans out there that love it and all that stuff, but I’m just a PG-13 guy…the cuss words, the drugs, all the other stuff – it doesn’t fly for me.”

Well bully for you, actor from 20 years ago whose filmography is almost exclusively related to being a power ranger. How mighty you must be, indeed, to go out of your way to detract from the work of others, even if their labours are making a zero sum like you relevant to the current cultural discourse. In all honestly, I’m surprised your boss at Sportchek let you take time off to do an interview with the Hollywood Reporter.

Ladies and gentlemen of the internet, I implore you to remember that Power Rangers, is little more than an American experiment in making a full-length TV show while paying half the production costs. I say this having faithfully watched the show from MMPR to the end of Power Rangers in Space during my childhood/teenage years. It’s also worth mentioning I only watched the very first episode of MMPR because a commercial led me to believe the series was a live-action Voltron. The bottom line is that when Chirs Hardwick calls Power Rangers a kaiju puppet show, he’s not wrong.

We may have loved Power Rangers, but it’s hardly Citizen Kane.

If Power/Rangers, itself, has a sin, it is in reminding nostalgic fans that we’re all twenty years older than we when the Megazord was saving the world from Rita and Lord Zed’s army of disposable minions. It’s a cruel reminder for those of us who don’t ponder our own mortality each time we go to the gym and feel a lance of pain in the joints. We can’t go back to the halcyon days of Dawson’s Creek, and that’s why the juxtaposition of James Van Der Beek – a symbol of the television of our youth – and Katee Sackhoff – the poster girl for the new, darker television of the 21st century – is such a jarring and powerful thing.

Nor should we forget Power Rangers only works through the lens of a child/teen audience. As adults, we can’t lose ourselves in the wistful fantasy of Zordon tapping us for a special destiny. Unless a grown-up viewer is particularly blind to the glaringly obvious, they should see Power Rangers as the story of child soldiers conscripted into battle against a foe they can’t possibly understand. It naturally follows that Shankar would view the power rangers as veterans suffering from the scars of battle. Full marks, from my point of view.

That said, I do question if the only person of colour in the story needed to be a cocaine snorting, wenching, adrenaline junky, but I’ll leave that debate to a person better qualified to explore it. At least Bulk and Skull were written off as the meth heads that they would have inevitably turned into.

Thus do I return to the words I tweeted after watching Power/Rangers, “Cool. Very cool.” Popular culture doesn’t live in a vacuum, and memories of stories past aren’t sacrosanct. Adi Shankar and director Joseph Khan did a fantastic job taking the power rangers out of the early 90s and framing their narrative within our current world view. Power/Rangers invites its audience to take the wonder of childhood and view it through the world-weary eyes of an adult. Even for people who never watched MMPR the payoff is impressive.

Of course, the greater tragedy at hand isn’t an audience who hates Power/Rangers because of precious childhood memories. I would save my slings and arrows for Haim Saban threatening to do what even George Lucas refuses to do: having Power/Rangers killed for copyright infringements, and in the process shitting on the affection of the franchise’s fans. Seriously, Saban? You know you’re a special kind of scum when you’re doing something that even George Lucas thinks is a step too far. I suppose it is hard to find one’s moral compass when it’s buried under a 3.5 billion dollar net-worth.

Update: Between writing this post and getting it online, Haim Saban proved himself the world’s biggest dickhead and filed a copyright claim against Power/Rangers. The bootleg is no longer viewable on either youtube or vimeo.