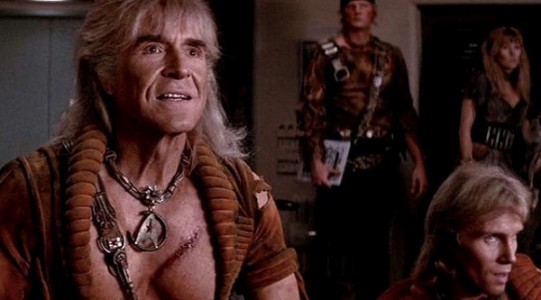 The other day I was watching the Deep Space Nine episode where we discover Dr. Julian Bashir’s true nature as a genetically enhanced human being. The episode includes a rather lengthy discussion on the history and apparent existential that threat genetic engineering presents to humanity and the Federation. This discourse can be summarized in two points:

Point 1: Genetic engineering is only permissible in the event of a “medical emergency.”

Point 2: Genetically “enhanced” people are forbidden from service in Starfleet.

Why should a genetically enhanced person be refused entry into Starfleet when species who enjoy genetic advantages over we lowly Terrans can freely join the service? Vulcans are smarter, stronger, and longer-lived than humans. Betazoids can exercise their ability to read minds without any sort of institutional control (e.g. Babylon 5’s Psi-Corps). Andorians possess a super-human resistance to harsh environments. All of these races can serve in a meritocratic institution where their natural gifts might make them more competitive for promotion than a baseline human – absent some sort of sliding scale to said meritocracy.

Since comparing a Vulcan to a human is an apples to oranges comparison, why not let humans tweak a few things here and there? Because the Eugenics Wars.

In canon, the Eugenics Wars occurred on Earth between 1993 and 1996. During this time a cabal of genetically augmented tyrants rose to power and conquered much of the world. Memory Alpha – my go-to research hub for Star Trek trivia – states the death toll from the Eugenics Wars was between 30-35 million people i.e. less than World War 2 and far fewer than Star Trek’s World War 3. The latter accounted for the deaths of 600 million people across three decades. Bearing in mind the “post-atomic horror” of World War 3 lasted into the early 22nd century in some parts of the world, I can see why Earth’s Federation signatories would want a ban on genetic engineering in 2161.

The invocation of the Eugenics Wars in 2373, however, seems a bit of a stretch. In modern terms, a Starfleet Admiral lecturing Julian Bashir about the dangers of the Eugenics Wars and invoking the name of Khan Noonien Singh, would be akin to President Reagan using the Thirty Years War and Gustavus Adolphus to shape his foreign policy in Central Europe.

It doesn’t make sense. I suspect there has to be something more to the prohibition against genetic engineering in the 24th century than a hangover from the 1990s. Bad as the Eugenics Wars were, they an order of magnitude less severe than World War 3.

A potential x-factor dawned on me yesterday afternoon – due in part to a two-day long Facebook discussion on this very subject. So kudos and thanks to everybody on that front, you know who you are.

Replicators and fusion reactors would make Earth in the 24th century a largely post-scarcity economy. However, an abundance of food, fuel, and material resources doesn’t mean things don’t need doing on Earth. Notwithstanding enslaved holograms in the late 2370s, there’s nothing in Star Trek to suggest human labour has been replaced by machines. There are no drones or droids in the vein of Star Wars to do the dirty or dangerous work. This leads me to believe that human labour is still of value to Earth, if not the entire Federation.

I submit the reason Earth maintains its ban on genetic engineering is to avoid destroying its potential low-skill workforce.  Somebody has to shovel shit into industrial replicators – so to speak. And if Earth embodies the Marxist idea of “from each according to his ability,” for the betterment of the species and planet, then society would break down if someone with an IQ of 180 had to maintain and repair a city block’s worth of solid waste reclamation systems.

As ideas go, I’ll concede this idea might be a little to bound up to a Huxleyan worldview. I’m not suggesting Earth and the Federation would go out of their way to breed Deltas to fill the ranks of manual labour jobs with blissful idiots. However, it’s clear that the Federation could make a mechanical workforce if they desired one. The absence of an extensive use of robotics – setting aside budgetary issues in the various TV shows – leads me to believe their exclusion is a matter of the command economy.

So there we have it. If we take Earth’s ban on genetic engineering at face value, we must admit a near 400-year-old historical event is shaping the Earth’s and the Federation’s domestic policy. While my theory about the role of below-median people in the command economy might not be right, it’s certainly a more plausible explanation for the ban on genetic engineering than the looming fear of history. At the end of the day, if you use science to uplift all the stupid, lazy, and shiftless people on Earth, who will be left to do the planet’s  mundane jobs?