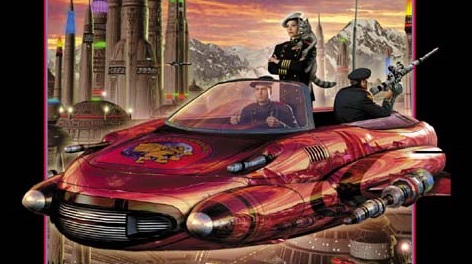 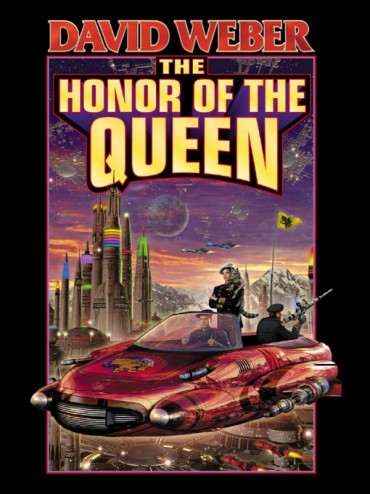 Military science fiction is one of my guilty pleasures. Why guilty? Principally because I know the subgenre, as a whole, is often problematic and sometimes quite lazy in the way it propagates an 18th/19th century vision of empire building into a glorious vision of the future. At its worst, military science fiction can be hegemonic, often indelicate in how it handles Others, and generally predicated on a monolithic view of the future…or as you might know it, Starship Troopers.

Which brings me to the last few Sunday afternoons I’ve spent with David Weber’s The Honor of the Queen. HotQ is the second book in David Weber’s Horatio Hornblower Honor Harringtion series. Originally published in 1993, there are moments when the novel feels like a historical artefact of pre-internet science fiction. In light of the endless technobabble of the first novel, I wasn’t expecting much from the second. Yet I found myself reasonably surprised as this 22-year-old novel proved a pleasing reprieve from everyday life.

Make no mistake, The Honor of the Queen isn’t what I would call a think piece. You won’t find me attempting to peel back its layers and expose the social commentary at its core. Frankly, there isn’t one. The Star Empire of Manticore is Space England during the glory days of the British Empire; they are the good guys. The People’s Republic of Haven is a nightmare state of “dolists” existing in an economically impossible world ripped right out of Margaret Thatcher’s nightmares; they are the bad guys.

The novel focuses on these two empires waging a quiet proxy war over the planets of Grayson and Masada. Both of these planets are filled with backwards, sexist, space Mormon, assholes. As the space assholes of Grayson are slightly less offensive than the space assholes of Masada, and a potential buffer against Haven’s expanding sphere of influence, Manticore decides to pursue a military alliance with Grayson.

Many pew-pew space laser battles follow. It’s kind of like reading a Patrick O’Brien novel without all the actual naval history, and that’s pretty fun – if a little wordy at times. All things being equal, I’d say the novel does what it does quite well, independent of its age. Even by contemporary standards, I think The Honor of the Queen is at least an above average showing. This being the case, there are still some moments when the story structure struck me as being potentially clumsy.

Weber indulges in using rape as a narrative device in The Honor of the Queen, just as he did in On Basilisk Station. About half way through the novel the space assholes from Masada capture a clutch of Manticorian crewmen and officers after a battle. Being space assholes, they proceed to rape the living daylights out of the women among the group. For the record, these actions are not depicted in the novel. Within the context of Masadans being a colony of religious, misogynistic, zealots, the violation against the Manticorians makes some internal sense – offensive and “triggering” as it may be for some readers. One should also note the captured male crewmen are beaten and tortured to death, though it is torture absent sexual degradation. One can hardly expect space Mormons to indulge in some man-on-man rape for the sake of gender equity. Or can we? I don’t know. Moving on.

On this front, I suppose I could point to Alex DeWitt and chalk this up to the book being a product of its times, but that seems like a lazy thing to do on my part. Quite honestly, part of me wants to say good on Weber for portraying Mormonism as the chauvinistic religion that it is. The fact that the events of one or two pages have left me pouring over the question of empowered women in science fiction is probably an indicator of Weber doing a decent job – by the standards of early 90s SF – in navigating these waters. It doesn’t revel in the offense; it simply presents it as a way of shading the Masadans and informing how the proxy war is now personal for Honor and her crew.

Except, this might be one of those moments where a young woman reading an Honor Harrington novel would look at these events and see rape as a consequence of women serving in the military, independent of how strong they may be as people or characters. Again, I don’t know, I’m not an expert. I’m a literary critic who enjoys some mental popcorn and is desperately trying to “check my privilege” amid a much larger discussion.

Also, it’s likely I wouldn’t be stuck in this debate if the novel didn’t regularly indulge in narration about how Honor doesn’t find herself to be pretty. Does page space really need to be devoted to other officers’ appraisal of Honor’s prettiness? I’m tempted to grab a Forester novel and how much of a big deal he makes of Hornblower’s good looks or lack thereof. Perhaps Weber is writing to the convention, thus making the novel more meta than I realize.

The Honor of the Queen pans out as a novel worthy of the lazy Sunday afternoons I devoted to reading it. The pacing is much improved from the first novel, though the technobabble and reckless abandon of the rules of relativity persist. The space battles are fun, even if the novel presumes too much on my ability to recall the functioning of impeller wedges (aka space sails) and other in-universe space gadgets. I’m reticent to let the book off the hook in terms of some of its gender issues. Then again, I could probably think of some greater contemporary offenders if I set my mind to the task. Still, the book gets more right than it gets wrong and it’s nothing if not engaging. I think it’s what people call a “fun” read. It’s not challenging, mostly inoffensive, and leaves the reader satisfied with a predictably happy ending.