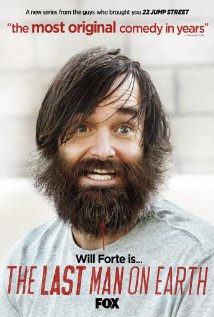 The Last Man on Earth has all the trappings of a show I should love.

The problem with The Last Man on Earth, and I’ll admit it’s a problem that took me two or three episodes to really notice, is it’s not really funny. I got wrapped up in all the lighting things on fire, smashing things with bowling balls, and physical one-off gags. These things are gimmicks, and out of the gate I confused gimmickry with comedy.

Beyond the slapstick, I soon reconciled myself with conceptual distance between Will Forte’s Phil Miller and Will Forte’s Abe Lincoln from Clone High. Though they sound the same, Abe was at least redeemable. Phil Miller is simply a terrible human being – a terrible human being who used up all the good “last man on Earth” shtick in the series’ first episode. As I mused on the seeming impossibility of managing a half-season of the Will Forte one man show, Kristen Schaal’s character, Carol, entered the fray.

Maybe when I was nineteen I would have thought a litany of jokes about the crazy girl being crazy was comic genius. Now, not so much. Now I look at Will Forte’s creation and wonder if it’s Forte, the Fox Network, his writers, or some combination of the above who never managed to move past a late-teenage worldview.

Suffering through episode after episode of The Last Man on Earth has me feeling singularly sorry for Carol having to spend the apocalypse married to the likes of Phil. Moreover, if my pathos is engaged all the time, how exactly am I supposed to shift into wanting to laugh about the end of the world?

When the series isn’t revelling in Phil being utterly awful to Carol, it’s guilty of being painfully obvious. From the arrival of January Jones’ character, Melissa Shart – GET IT, SHE’S ANOTHER WOMAN CHARACTER AND HER LAST NAME IS WHAT HAPPENS WHEN YOU POO AND FART – to the coitus interrputus of Todd (Mel Rodriguez), the show is utterly predictable. The jokes are so lazy and the writing so textbook that it’s almost impossible not to see what’s coming down the pipe. I’m certain a potato might be caught off guard by the series’ writing. Alas, most sentient creatures should be able to see through the gambits and charades.

My prediction: Phil ends up alienating everybody in the last enclave of society and leaves Tuscon in the series finale. Then, the first three episodes of the second season will be The Search For the Last Man on Earth. You see, it turns out Phil did a bunch of things off-camera that made their lives better. Only in his absence will the group realize how much they need Phil. Thus, his awful ways will be validated, and the show will return to the status quo.

Despite these obvious shortcomings, I still wanted to believe in The Last Man on Earth. I found myself desperately searching for some evidence of self-awareness in the series. Perhaps it’s being meta. Maybe it’s a commentary on actual gender issues. Could it be Phil’s monstrously selfish behavior is the product of spending two years living on his own, searching for any signs of life in the world and finding only silence? I wanted to give The Last Man on Earth the benefit of the doubt, but each time I did it ended up farting in my face and calling it a joke. I can only take so much wind absent substance – even on a hate watch.

The bottom line is there’s no soul to The Last Man on Earth. Will Forte has created a truly reprehensible character for himself. Kristen Schaal’s talents are utterly wasted on a show that jumped the shark after its first episode. Though set in the not-too-distant-future, the series feels about as fresh as a 1950s “take my wife, please” joke. Of all the things The Last Man on Earth could have been, who knew it would end up as such a crass, unfunny, and mean-spirited exercise in juvenile wanking.