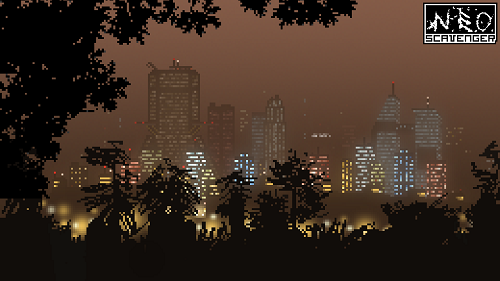 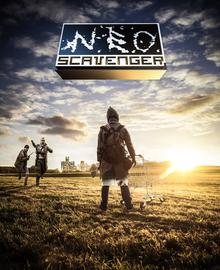 Imagine a broken world. It’s a world where people hunt other people for a splash of clean water or the comfort of warm clothing. A place where coveting a person’s boots could lead to murder. And now, just to drive home the point, picture the last bastion of civilization is the city of Detroit. This is the world of NEO Scavenger: a place where Detroit represents a refuge against the savage world.

Yeah, yeah, I know that was a cheap shot. However, since Paul Verhoeven turned Detroit into a litmus test for dystopian futures, there’s no small irony in NEO Scavenger transforming the Motor City into the last bastion of civilization.

NEO Scavenger is a hex-based, survival/role-playing game. Unlike many RPGs, which often open on a note of exposition, NEO Scavenger tells players precious little about what’s going on in the world. Likewise, the game opts for a minimalist approach to character management. There are no stats, leveling, or THAC0 to deal with. A player’s abilities are singularly governed by a handful of perks. Though the game’s interface has a bit of a learning curve, its seeming simplicity quickly gives way to a highly complex role-playing and crafting system.

One of NEO Scavenger’s most remarkable features, and the thing that has earned me more than a few strange looks when talking about the game, is the way it elevates the most banal parts of a role-playing adventure to literal struggle for life or death. Players start the game as that old RPG stand-by, the amnesiac. Emerging from a rundown cryogenics facility, one begins the game absent any clothing or tools for survival. Within the wastelands, players face the sort of challenges and dangers one would expect to find if Cormac McCarthy wrote a D&D module. For all the monsters, aliens, and cannibals walking about the map, it is exposure and starvation that present as the player’s foremost nemesis.

This need for the essentials of life informs many of the choices a player may make as they work toward the glow of Detroit. Though it’s all the rage for games post-BioShock to offer a morality system, NEO Scavenger makes this issue of idealism versus pragmatism an internal matter. Should a player keep digging through a burned out apartment building to find a much needed backpack or right shoe, or should they plunge a fire-hardened spear into the back of another unsuspecting wanderer of the wastes? The game is generally agnostic to such choices. However, like any Dungeon Master worth their salt, it makes a player well aware of what they are doing as they do it.

I can honestly say I was not prepared for the powerfully evocative nature of NEO Scavenger’s turn-based and largely text-driven combat. Clicking the button to deliver a coup de grâce to an unconscious NPC has an unexpected weight to it. In fact, every choice seems to be paired with a moment of reflection on the need of the action given the situation at hand. In my experience, it was all too easy to cross the gossamer-thin line between civility and savage. Restraining myself in lieu of a more clever solution often lead to my death.

While other writers have been quick to award NEO Scavenger the “rogue-like” label – a moniker which attracts and repels in seeming equal measures – I think there’s more to this game than a call back to a something most people never played. NEO Scavenger, like life, is about finding nobility in the struggle to survive. As in life, it is possible for a player to make no mistakes in NEO Scavenger and still freeze to death or die of septicemia. The game is at once cathartic and cautionary. It’s escapism but also a reminder that were I to find myself stripped of the trappings of civilization, I would probably last as long as a player character freshly decanted from their cryo-tank.

Bravo to Daniel Fedor, the game’s designer, programmer, and artist. NEO Scavenger is a prime example of how a minimalist approach can be a wholly engaging experience. Though some might say games like this are about recapturing the “good old days” of gaming, I like to think that a younger version of myself would not have appreciated the subtle nuances which make NEO Scavenger stand out from the crowd.