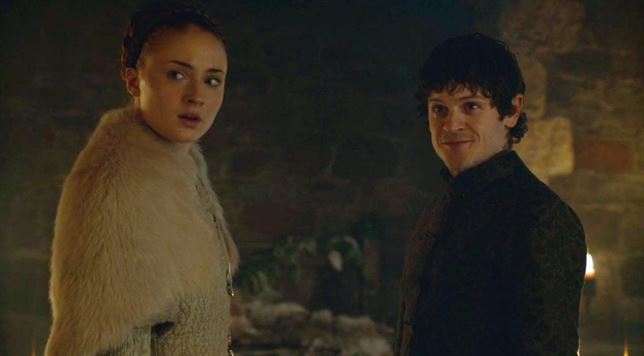 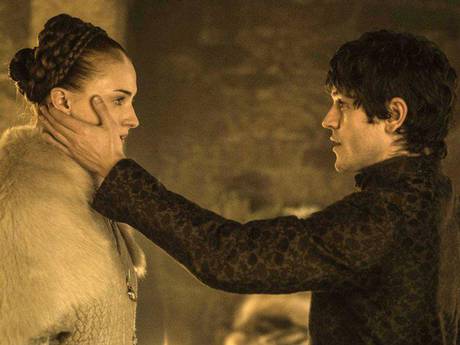 Because there aren’t enough people talking about Sunday night’s episode of Game of Thrones, I am going to offer up my two cents on the subject.

There’s no shortage of people crying foul on Game of Thrones for what amounts to a rape scene between Sansa Stark (Sophie Turner), and Ramsay Bolton (Iwan Rheon) witnessed by Theon Greyjoy (Alfie Allen). At this time I want to make clear that I’m not here to talk about trigger warnings, rape culture, sexpositioning, or anything else of the sort.

For the record, I see the entire spectrum of human joy and misery as fair game for art. Full stop. Anything less than a universal approach to art amounts to censorship. This doesn’t mean everything should be respected as good art. To wit, I submit Game of Thrones wasted an incredibly powerful scene on the back of lazy writing and poor narrative choices.

Point 1: We already know Ramsay Bolton is a shitstick. Between the writing and Iwan Rheon’s pitch-perfect portrayal of a monstrous human being, the point is sold. He hunts people for sport. He feeds his ex-lovers to dogs. He revels in flaying people alive and cutting off extremities e.g. Theon Greyjoy’s cock. Does having him take Sansa in a forceful way add anything new to his character? I think not. It only piles on what we already know while spending a very expensive coin for what I see as little return on investment.

Point 2: If the scene is meant to be a preamble to “How Sansa got her Groove Back” it is a lazy and short-sighted maneuver on the part of the writers. The on-screen moment that drove Theon Greyjoy to tears is unlikely to be a one-off – unless the next episode opens on Sansa cutting Ramsay’s throat. In which case, I’ve completely misread things and much of this post is wrong.

Given Ramsay’s appetites, Sansa will have to endure the indignity of his company many times. How will Sansa go about reclaiming the initiative after being repeatedly violated by Ramsay Bolton? Are we to presume it won’t damage her physically and mentally? I don’t know anything about being a rape survivor, but I suspect “getting over it” in the name of revenge is a little far-fetched, unless one happens to be Marsellus Wallace in Pulp Fiction.

Point 3: If the rape scene is meant to be a preamble to “How Theon got his Groove Back” then it’s the worst sort of pedestrian trash. It effectively sends a raven message that the writers are willing to sacrifice Sansa’s agency to give Theon, a literally emasculated character, a path to reclaiming his manly virtue. He would become the archetypal prince saving the princess from her evil husband. I could not imagine a more listless narrative course.

The offending scene, and all its subtext, as I see it, leaves the writers with one of two outcomes for moving forward with Sansa’s arc. On the one hand, Sansa could collapse into her own mind. This figuratively kills the powerful woman we’ve seen to date in this season, and sets up Theon as a redemptive figure. Alternatively, Sansa could channel some Kill Bill energy. Try as I might, I don’t think I will be able to suspend disbelief enough to accept this outcome without some serious and traumatic follow-up for Sansa. To do less would be to devalue the powerful scene between these three characters as little more than an exercise in raising the stakes and reminding the audience of Ramsay Bolton’s nature as a shitstick.

I’ll concede this scene may have needed to happen the way it happened for reasons that will become clearer in the future. At the same time, I like to think of myself as a reasonably intelligent person. I’m more than capable of imagining alternatives to “and then he raped her” writing. In the short term, and in light of some relatively weak writing in season three and four, I’m disinclined from believing the writers are building up to something I can’t see coming. That being the case, I don’t think anything coming down the pipe is so brilliant it needed to be built on the back of a rape scene – notwithstanding Sansa killing Ramsay in his sleep on their wedding night as a reflex to his actions.

To reiterate, I don’t think this episode makes Game of Thrones “bad” for hosting a rape scene. I am not offended by what happened on screen. As a critic, I do question what I see as a poor use of a powerful moment to utterly predictable ends.