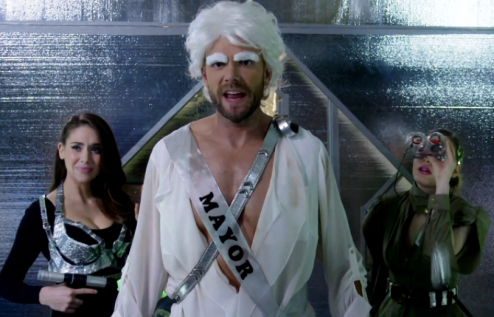 You know what’s funny (read: sad)? I spent an hour dicking around on the internet between writing this paragraph and opening Word to craft this review. How have I reached undergraduate levels of time wasting? Simply put, I don’t know that I have a lot of good things to say about the first two-thirds of Community’s sixth season.

Every Tuesday morning I wake up with the giddy anticipation of a child on Christmas morning. And every Tuesday night I find myself wondering why I the episode didn’t make me laugh. It would be unfair to invoke gas leak comparisons, at least for right now. I do, however, think the series is trending in that odious direction.

Everything seemed fine with the premiere episode. Even absent Donald Glover, Yvette Nicole Brown, Chevy Chase, and John Oliver, Ladders felt like classic Community. The episode was screwball, a little meta, and there were no shortage of one-off gags predicated on a mixture of timing and shtick. On the off-chance people were coming to season six without watching the first five seasons, Paget Brewster’s Frankie acted as good straight man to the insanity of Greendale Community College. It wasn’t the best thing ever, but it felt like a nice homecoming.

From that point on, something has consistently felt off about the little series that refused to go quietly into the night. At first, I thought it was me being overly sensitive. Then Britta pooped her pants.

It was the shart heard around the internet.

I understand there’s an inherent challenge to keeping characters fresh (no pun intended) on a long-running series. Since Community revels in shoving the head of pop culture up its own ass, it’s probably harder to write than the average episode of Two and a Half Men. At the same time, I don’t think I’m raising the bar too high to say I expect better than to bear witness to a character soiling herself. Let’s come at this from another angle, does anybody recall Hawkeye shitting himself during the eleven years of the Korean War?

AND JESUS WEPT, yelled Academy Award winner Jim Rash as he portrayed a VR addicted Craig Pelton. Does anybody else remember when the Dean’s tendency to fixate led to a homage of Francis Ford Coppola in Hearts of Darkness? Now, to borrow a line from Frankie, he’s simply an idiot.

Abed un-ironically yelled “Bazinga” before popping out of a pile of Frisbees.

Honda revisited the Subway gag by turning an entire episode of Community into a commercial.

Chang did a pretty spot-on impression of Pat Morita but reduced the most historically and emotionally resonant scene of The Karate Kid to a farce.

Annie shows up to pout and show cleavage.

I was inclined to let much of this laziness slide until I noticed something utterly damning in Intro to Recycled Cinema. See if you can spot the problem in this picture. 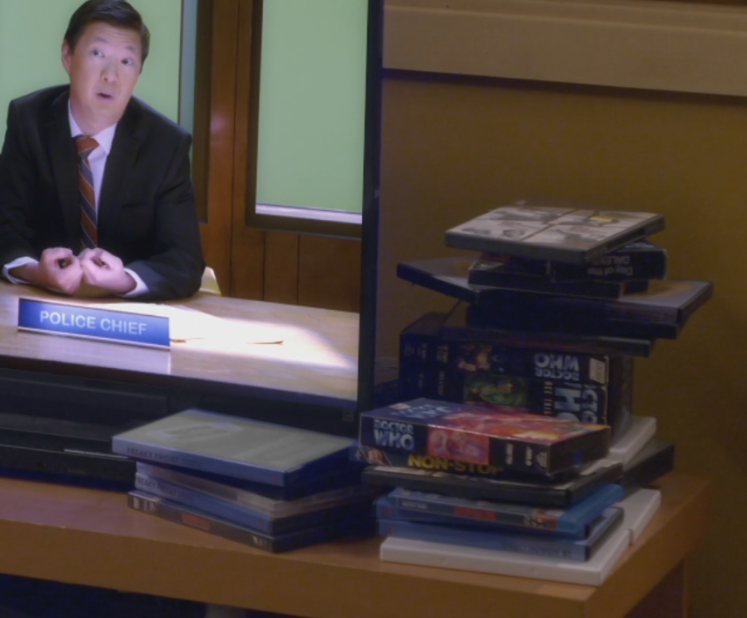 What in the name of Lucifer’s beard is Doctor Who doing in Community? There’s no such thing as Doctor Who in Community. There’s Inspector Spacetime. You know this. I know this. Hell, I had Travis Richey aka Inspector Spacetime on the podcast a couple years ago. We talked for an hour and a half. And I swear to Gozer I will drive to LA and give Dan Harmon such a telling off if it turns out this season was set in one of the other realities.

The common thread between episodes is no longer a love of pop culture commentary or a series of comically depressing voyages into human dysfunction. Now we’re dealing with sight gags that end up getting explained and conflicts that don’t even deserve a Winger speech. When all else fails, Chang acts like a head case. Whatever pop culture references do manage to make their way into the writing don’t have any purpose.

Remember when Danny Pudy’s Abed was playing space invaders and Paul F. Tompkins walked up to him and said he should slow down or else the Rylans would recruit him to fight the Ko’Dan armada? In about 20 seconds of dialogue the audience goes from Asteroids to The Last Starfighter to Farscape. While some people might write off the mile a minute references as inherently lazy, they do serve a purpose. Both Starfighter and Farscape are about characters who don’t fit in where they are. Alex Rogan and John Crichton have to confront becoming someone else to fit in at the place they really want to be. These twenty seconds of pop culture references serve to reinforce the overarching theme of Mixology Certification: alienation.

I know a few people are reading this and thinking I’ve gone way too deep down the rabbit hole. Should a person have to get this critical to be able to enjoy a TV show? Generally, no. However, this example speaks to the quality of the writing in older seasons of Community. Though deep readings weren’t necessary, they could be done. Granted, people might think me a weirdo for devoting my time to such an exercise, but those looks don’t invalidate my analysis. That is to say, I might be crazy, but I’m not wrong.

Now ask yourself what the current season is doing to facilitate voyages down the rabbit hole? I submit, very little. Try as I might, I can’t even find the rabbit hole in most episodes. So either the metaphors have become so dense even I can’t figure them out – possible, but not likely – or the writing is as remarkably dull and uninspired as it seems.

Perhaps being on the internet has denied Dan Harmon a much needed machine to rage against. Absent the time constraints of network television, he can preside over a thirty-minute episode with impunity. My suspicion is the ability to say everything has come at the cost of showing what’s clever. For a series like Community, the additional creative freedom of the internet might be at odds with the je ne c’est quoi that makes Greeendale tick.

Tl;dr, this is shaping up to be the second-to-worst season of Community.