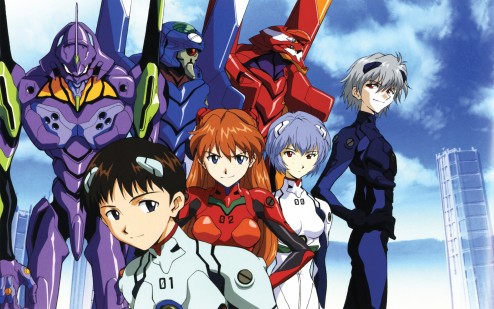 First, and for the record, I would like to say this post and all those that follow in this series can be blamed on Leah Bobet. Her tweets about Evangelion inspired/inceptioned me into rewatching the series.

For the sake of my sanity, I’m going to break this diatribe up into parts. Part one focuses on the first seven episodes of the series. There’s no particular reason behind the number, beyond Evangelion’s wack-a-doodle story reaching a saturation point in my head.

I should also be very honest about the fact that I hold no special love for Evangelion. Despite Wikipedia calling it “one of the most successful and critically acclaimed anime television series of the 1990s,” and “a critique and deconstruction of the mecha genre,” it’s always managed to confuse me more than it has impressed me. My reaction to the series when I was twenty-two was mostly along the lines of, “what the fuck did I just watch?” Eleven years and seven episodes later, little has changed.

On that note, let’s get into it in the finest fashion of Mr. Plinket.

Evangelion is a show about robots, religion, and Space Jesus aka Shinji Ikari. There’s hardly a scene that goes by where somebody isn’t saying something, doing something, or blowing something up in a way that references religion. Shinji’s first fight with an “angel” features multiple explosions where the blast patterns are in the shape of a cross. As for Shinji, who resents the pain he feels at the hands of an aloof, all seeing, father, well I don’t have to draw you a picture on that one. But if I did, it would look like this. 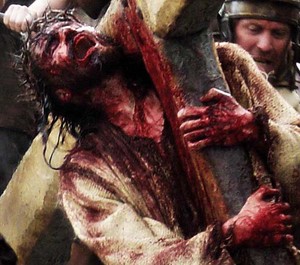 Though there’s no shortage of pillaging from Christianity, the series doesn’t limit itself to the Abrahamic faiths. Shinji, Rei, and Asuka (a trinity) were all augured to be Eva pilots from something called the “Marduk Report.” For everybody without a degree in classical studies, you made a good life choice.

For everybody else, Marduk was the patron god of the city of Babylon and head of the Babylonian pantheon. Don’t say you never learnt something on my website.

The problem is the aesthetic is seemingly absent message. As such, it wears thin very quickly. A person can abide only so many nuclear cross explosions before the “deconstruction” of religion feels more like shoe-horning so much ephemera into an ark.

Maybe as an uppity undergrad I was content to bask in the symbolism and feel clever for picking up on its presence. Now, it’s tedious and makes me feel like I should have done a useful minor, like business.

We get it, Hideaki Anno, you either love religion or hate religion – I honestly can’t tell.

Number 2: The Plot Is Flimsy

The addition of one qualified therapist or mental health professional on the NERV staff would break the entire series. If Shinji didn’t have to single-handedly deal with critical incident stress while working in an office with his asshole father, insufficient professional development, indifferent coworkers – looking at you Ritsuko – and then go home to living with a high-functioning alcoholic, he might not end up a giant hot mess of self-loathing. Nor should we forget he’s doing all of the above while going to high school. High school: literally, the worst place on Earth for gawky introverted teenagers.

On that point, Evangelion might best be seen as an historical artefact. It shows the audience how far we’ve come from a time that would imagine an agency like NERV spending billions of dollars building over-engineered kill bots without considering the fallout of sending a manic depressive teenager into battle. Now such an omission would likely be seen as the creators being a little too on the nose with writing their feelings into the story. Either that, or some snarky bastard like yours truly would come along and write off the entire story for not having considered its giant plot holes.

Want to convince me the world is in constant peril from a cosmic threat beyond my comprehension? Don’t play this song four times in an episode where Shinji and a Penguin practice eating synchronized breakfast for the 2016 Tokyo-3 Olympics.

This one goes hand-in-hand with why NERV should have a staff therapist. If there were even a single responsible adult running Earth’s last line of defence against a Third Impact, they would have realized letting Shinji live with his boss is a terrible idea.

It’s also clear Misato is only outwardly put together when she’s working. All things being equal, she’s one of the most capable characters on the show. At least until she gets home and we see her life through the lens of a messy apartment, morning beers, and weird relationships with teenage boys. Am I missing something? Does anybody else see the series reducing the woman who should be running NERV into a punchline/object of fapping for teenage boys?