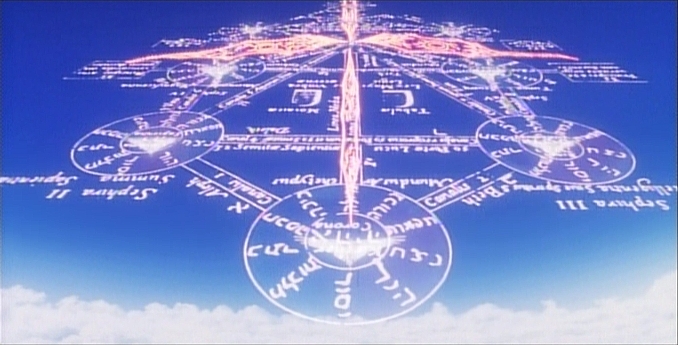 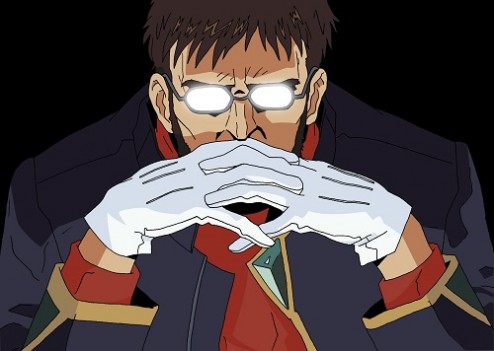 There are any number of ways to attack the second act (episodes 8 through to 16) of Neon Genesis Evangelion. Personally, I think I’ll go at it with a drink in one hand and a club in the other. Wait, please, don’t go. I promise, no more stupid jokes.

Tempting as it is to resume my thematic, Mr. Plinkett-inspired approach to the series, I want to change gears. Save for adding, “Gendo is a terrible father,” which dovetails pretty closely with, “NERV needs a therapist on staff,” to my list of the series’ thematic crimes, episodes 8-16 are largely more of the same. The biggest change comes with the introduction of two new characters: Ryoji Kaji, who is totally not a spy, and Asuka Langley Soryu, pilot of Evangelion Unit-02. Behold, my subtitle for this post.

Evangelion Characters Who Should Be Hit By A Bus

Kaji’s introduction to the story is as a secondary character elevated to the level of recurring pain in the ass. We meet him as an escort for EVA-02 and Asuka. Once they arrive in Japan, he decides to “stick around for a while.” I don’t mind new characters, except for when they are unrepentant sex pests. Is it too soon for a Jian Ghomeshi joke?

If the 1990s could imagine smart phones, and the associated rise in homemade porn, Kaji would be the guy who sends endless dick pics and jerk off videos to Misato and Ritsuko. His first line in almost every scene presumes either Misato or Ritsuko want to have sex with him. When Kaji and Misato get stuck in an elevator, he invites her to take off her top to keep from getting too warm. The leering smarm in his voice transcends barriers of language – a credit to his voice actor, which is the only kind thing I have to say about this character.

I don’t care if Evangelion is the product of the 90s; I’m an evolved North American in the year 2015, and Kaji makes no god damned sense. Try as I might, I can’t fathom how Evangelion can style itself as clever and metaphoric while working through such utter tactless garbage. Am I to believe that as a deconstruction of the mecha genre, Evangelion can include people in Tokyo-3 filing insurance claims against NERV, but NERV itself opted out of an HR department?

Kaji doesn’t even have the decency to be circumspect with his propositions. He regularly walks into a room full of people and invites any woman within his line of sight to touch his penis. How are all the engineers, technicians, and computer programmers at NERV cool with this guy? He does nothing on the job save for trying to score. Kaji might be accurate to the time period and cultural norms of the production’s point in history – I honestly don’t think he is, though – but that doesn’t mean it’s entertaining to watch by modern standards.

Also, Kaji’s not a spy. Don’t let the foreshadowing fool you. Kaji is totally not a spy.

All this said, I would rather spend a night hanging out with Kaji and his bros than spend ten minutes with this next character.

Again, all glory to the character’s voice actor for her ability to evoke such unmitigated rage in me. Whenever Asuka goes into battle, I’m cheering for the angels. Never have I come across a character so shrill, abrasive, and utterly insufferable that I would celebrate her death with a glass of fifteen-year-old single malt.

The real problem with Asuka manifests in the gap between her intended purpose to the story and the execution, therein. In short, Asuka is the masculine ”ideal” that Shinji can never be. Shinji spends his days hating himself, being afraid of other people, and constantly bowing and scraping for things that are not his fault. If there’s a single phrase of Japanese you will learn from Shinji, it’s gomennasai – I’m sorry.

Asuka is an aloof, alpha who finds Shinji, and most other people, weak and pathetic. She’s toxic mix of teenage gung-ho confidence supported by textbook genius. At age fourteen, we’re supposed to believe Asuka has already completed university. This being the case, I’m not sure why she is enrolled at the local Tokyo-3 high school.

In this light, I understand how Asuka is supposed to be a foil for Shinji. In practice, I see her as little more than a bullying asshole. Whatever flashes of insecurity/humanity Asuka might offer, particularly when it comes to the series stripping her naked – because anime – are completely overshadowed by the endless verbal abuse she lays on Shinji’s doorstep. Worse still, she moves into Misato and Shinji’s apartment, turfing the lad from his bedroom in the process. Shinji had one safe space in the world, other than inside EVA-01, and it is denied to him by an unwelcome roommate who offers him nothing but scorn and shame.

All of the feels…

I understand and sympathize – despite my critical venom – with the director’s desire to share his depression and sense of perpetual isolation through Evangelion’s writing. My sympathy, however, only extends so far. It’s one thing to write about feeling worthless as a person. It’s another to create a series of contrivances designed to pointlessly torture the protagonist into a protracted state of self-reflection in the third act. Sixteen episodes into the series and my suspension of disbelief isn’t shattered by Judeo-Christian mecha so much as it’s stomped into a fine, pink, pulp by the gimmicks the series uses to create character conflict. It feels forced and dishonest.

I was a bullied kid who had to find his steel. I was a depressed kid who needed to get help. The unending psychological torture the series heaps on Shinji isn’t my story nor is it the story of anybody I know who walked a similar path. If anything, the drama of Evangelion cheapens the torment of depression and isolation, as these things are made terrible by their banality and routine.

Now I’m left to wonder how the “highly cerebral” and “psychological” third act will land given I have very little emotional buy-in to the characters. If things feel ham fisted now, how will they feel when the story goes off the rails? I’ve had a sample of this during Shinji’s battle with the 12th angel, and it was weird. Five minutes of an anti-action sequence are devoted to Shinji having an existential conversation between his id and super ego…or maybe it is the angel trying to hack his brain. I don’t fucking know.