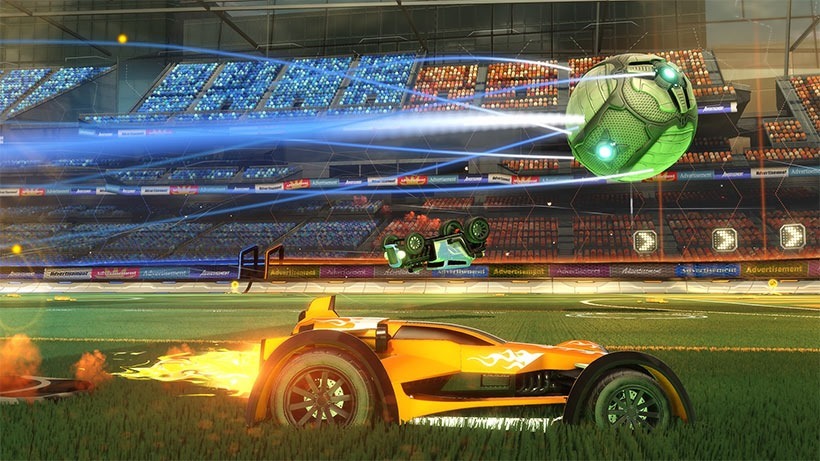 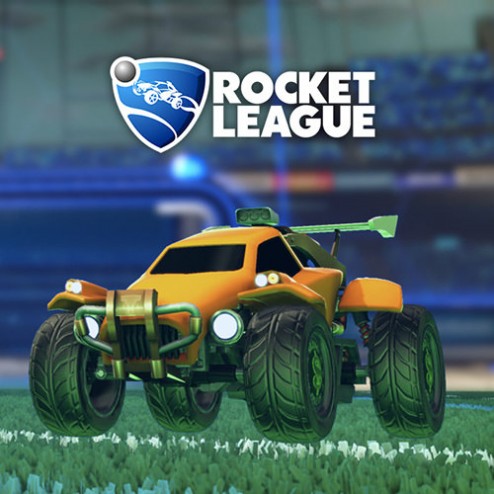 Sports games, and sports in general, don’t typically hold my interest. The only exception to this rule is soccer. Alas, bringing up soccer within my extended social circle evokes a gamut of complaints about its slow pace, long playtime, and apparent lack of physicality compared to football (American or Canadian) or hockey. Enter Psyonix’s Rocket League, a soccer game that is the most gloriously North American answer to the perceived shortcomings of the beautiful game.

Note: I reviewed Rocket League on the PC. The game is also available for the PS4.

Rocket League is as elegant to describe as it is to play. Simply put, it’s three-on-three arena soccer featuring super-charged aerobatic rocket cars instead of people and a ball the size of an atlasphere. I’ll give you a moment to process the last sentence.

Even though Rocket League is the sequel to 2008’s Supersonic Acrobatic Rocket-Powered Battle-Cars – a game I never played. Sorry, Psyonix – it feels like the natural evolution of another “sports” game near and dear to my heart, Grifball. Just as Grifball reminds players that sports games don’t need to be about stats and salary caps, so too does Rocket League put player experience at the forefront of all considerations.

Yes, yes, “player experience” one of those weasel expressions critics love to use. Bear with me for a moment, and you’ll see why I used it. Consider what makes a sports game fun. Fiddling with trades and simulated training camps, in my estimation, is foreplay to the main event. Once the whistle blows, a sports game’s fun is almost always directly proportional to how much a player is winning. This would be fine were it not for the fact that sports and sports games overlap on a fundamental truth: most people aren’t going to be superstars. Trying to carve out glory in online matches can be a painful, laggy, and often humiliating affair.

It took me about two minutes to score my first goal in Rocket League. Ten minutes later I scored my first aerial goal; that is to say I put my rocket-powered awesome-mobile into flight and redirected a ball in flight between the pipes. Ten minutes after that, I cleared a ball using the automotive analogue to a bicycle kick. I’ll never be Pelé in real life or in EA’s FIFA games. In Rocket League I can chip in a goal from midfield like I’m David bloody Beckham. Here’s the best part, I’m probably only an average Rocket League player.

This is why I used “player experience” in a non-ironic way. Rocket League wants you to feel like a star even if you’re a rank newbie. Much like Grifball, Rocket League’s techniques and strategies – many of them are self-evident to anyone who has stepped on a pitch more than once in their life – are subject to the inherent chaos of the game. This chaos is quite often the great equalizer. Would-be rocketballers don’t need to be play makers; they need only get in, get going, and capitalize on chances when the gods, teammates, and opponents present them. Likewise, the standard 3v3 gameplay makes every car on the pitch an essential part of their squad’s success or failure. And in the event of the latter, a five minute game clock ensures merciless pastings are kept to a minimum.

While a person can content themselves to playing a single-player season of Rocket League, which is quite capable if a little bare bones, the game’s real bread and butter is in online play. Of the eighty, or so, online matches I’ve played, I’ve had a positive experience seventy-nine times. Let’s be clear, when I say positive I mean my gaming experience was free of toxicity, harassment, or otherwise depressing things. Nobody jumped down my throat when an attempt to clear the ball turned into an own goal. A missed shot on net never yielded a commentary on my ancestry. I do witness the odd rage quit, but these things are to be expected. It almost feels like Rocket League has attracted a classy sort of player. Of course, now that I’ve said it I’m sure I’ve put some sort of jinx or whammy on things.

I could end the review here with an emphatic recommendation to buy Rocket League. While I think everyone should do just that, I want to spend a few words talking about longevity.

Rocket League’s strength comes from its ability to ensnare me with solid competition and a clever take on soccer. Unlocking vanity items for my car is fun, but it’s not why I keep coming back for more. Gaining new pitches and cars through DLC purchases would make for nice scenery, but I doubt they would fundamentally change the game. Unless we were playing low-gravity Rocket League.

From my point of view, the thing to give Rocket League some serious mileage – pardon the pun – will be paring the game’s light-hearted tone and fast pace with the capacity for richer competitive play. Give me actual leagues. Give me weekend tournaments. Let me form impromptu teams with people without having to go through Steam. And make my glory as a rocketballer last longer than a single explosive match. Some or all of these things, through a combination of patches or mods, will make Rocket League a game for the ages.

Even without additional bells and whistles, Rocket League remains a stupendously fun game. The gentle learning curve makes the rocket-powered pitch very friendly to newcomers. Similarly, excellent matchmaking ensures nobody is playing too far above or below their station. Even if a person doesn’t like sports games, they would do well to check out Rocket League.