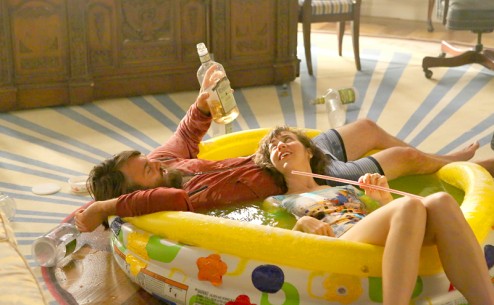 The first season of Will Forte’s apocalypse comedy, The Last Man on Earth, fell flat with me. Other than the occasional sight gag, I found the show to be painfully unfunny and a salute to the worst parts of the human experience. To wit, Forte’s character, Phil Miller, was an asshole. Granted, two years of being alone might turn anybody into a bit of a self-involved narcissist. Yet the more I tried to give Phil Miller the benefit of the doubt, the more the writing let me down. On Sunday night, the season two premiere of The Last Man on Earth gave me a reason to think the series might have grown up a bit.

There’s a substantial change in town between the first and second season. Though some might chalk it up to a long arc of emotional growth for the Phil character, I’m more inclined to think that the writers realized they had reached the limit of what they could do with an emotionally stunted prick as the main character. The first episode of season two sees Phil and Carol (Kristen Schaal) remarried and looking for a new home in the ruins of America. True to form, this is no somber road trip. In fact, the light hearted, “I can do anything I want” gimmicks actually land as something other than tone deaf slapstick.

Sure, it’s supremely goofy watching Phil and Carol use an F-117 stealth fighter as a pickup truck, but now the whimsy isn’t poisoned by Phil being an asshole. The kiddie pool margarita is as gross (or genius, I can’t really tell) a concept as ever, but seeing Carol in it with Phil gives the show the warmth it was otherwise missing. And weird as it is to invoke two adults bathing in a party drink as a symbol for the rest of the show, I can think of no better tableau for the episode. Phil and Carol are now, finally, both in it together.

Phil is still a bit irascible. Carol is still a bit of a nitpicking weirdo, but now both characters are in on the joke. Carol isn’t simply the wet blanket half of the odd couple. The duo might revel in congressional themed puns while having sex in the White House, but the weird coitus is no longer a tool for laughing at Carol. The Last Man on Earth is finally letting me care about Phil and Carol as equals.

What’s really remarkable is how effortlessly the writing is able to sell me on Phil and Carol as actual people in a somewhat unconventional marriage. Carol’s art book is mobilized as an effortless tool to fill in the missing parts of the couple’s story. It catches the audience up on their past, while also injecting some much needed humanity into both characters.

From where I left it last season, The Last Man on Earth seems almost unrecognizable. No longer will I be tuning in to hate watch the show. Twenty-two near flawless minutes of comedy has me wanting to see Phil and Carol reunited in the next episode. Likewise, my trust is restored that Phil, though still a bit of a jerk, isn’t going to jump at the first chance he gets to abandon Carol for someone more physically attractive.

Now the only question remains what role Jason Sudeikis will play as Phil’s astronaut brother. He’s not bad as the cut-away joke guy, but that gimmick will play itself out sooner rather than later.