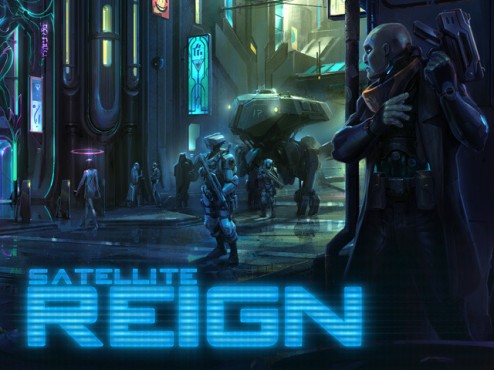 It seems almost impossible to begin a review of Satellite Reign without first making some mention of Syndicate. No, not the dub step FPS from a few years ago. I mean Bullfrog’s real-time strategy/shooter featuring cyborgs and corporate world domination. Video game enthusiasts of a certain age – you know who you are – will no doubt be drawn to Satellite Reign as a spiritual successor to Syndicate. However, nostalgia for nostalgia’s sake is little more than imitation. And while Satellite Reign may have the odd rough spot here and there, it is very much a tremendous iteration on the source material.

Developed by Australia’s 5 Lives Studios, Satellite Reign is a real-time, squad-based isometric shooter set amid a dystopian cyberpunk city. As the name implies, the action unfolds through the perspective of a geostationary satellite. While there are no shortage of video games that lean toward the cyberpunk aesthetic, Satellite Reign stands head-and-shoulders above the crowd for capturing William Gibson’s neon-highlighted vision of the future. I won’t mention how much time I’ve spent taking screenshots of the city like an obnoxious digital tourist.

Each agent under the player’s control has a unique skillset that can be expanded through a reasonably straight forward skill tree. The player is tasked with using their team to infiltrate the headquarters of Dracogenics: a rival corporation that uses a proprietary blend of kidnapping, cloning, and post-human technology to facilitate consciousness downloading for the ultra-rich at the expense of everybody else. Since the player is working for a corporate entity, the game is less a story of the 99% versus the 1% as it is a narrative of monopoly breaking through wet work and corporate raiding. Picture Google versus OCP with everybody dressed like they are at a Tron convention.

In another about face from Syndicate, Satellite Reign unfolds over a vast and sprawling cityscape. Once the game is loaded, players are free to explore the city and its various districts. Each district offers a series of missions that serve to make the ultimate objective a bit less daunting. For example, sending a hacker into the city’s surveillance offices makes a district’s CCTV cameras more sluggish in responding to trespassing or generally illegal activity. Other jobs afford players additional cash, prototype weapons, and equipment.

I’m reticent to slap the label of “sandbox” on Satellite Reign. When a player isn’t working a mission, there is little else to do but walk around and chuckle at the various homages and meta references peppered throughout the city’s establishments. Even calling the game non-linear seems wrong since all roads lead to Dracogenics. Perhaps it’s best to see SR as something that encourages a degree of flexibility in how its players go about the business of corporate espionage. Side missions happen, or don’t, at a player’s discretion. Likewise, for every opportunity to tear about the city with guns blazing, there are as many uses for stealth and bribery. Though the latter path tends to get a bit expensive, at least in the early game.

Between bribes, researching new equipment, and upgrading agents with new weapons and augmentations, Satellite Reign injects a decent degree of resource management into the equation. It’s not as comprehensive as the likes of X-Com/XCOM, but there’s an expectation of common sense to ensure expenditures don’t outpace income. And allow me to give my unending respect to 5 Lives for using the Superman 3/Office Space computer virus as a player’s primary income source. Let it not be said there isn’t a lot of love for the genre within this game.

True to the cyberpunk motif, life is cheap in Satellite Reign. This is another area where Satellite Reign has improved on Syndicate. The latter presented agents as resources to be jealously coveted and guarded. A total squad wipe toward the end of a game of Syndicate could lead to a cripplingly expensive death spiral. Now, an agent’s death is a minor inconvenience. A shot, lasered, or otherwise exploded agent is cloned into a new body at the cost of diminished health, stamina, and a small line item on the player’s budget. These lost traits are easily recovered as players can mind hack civilian (or even police) bystanders and send them off to the cloning vats. While I might feel the occasional pang of regret when I leave an agent to the tender mercies of corporate security, sacrificing a clone for the greater good is now a viable strategy.

Call me a monster, but these cold and callous decisions are part of what makes me feel like a corporate executive while playing Satellite Reign. Satellite Reign’s style presents the concept of human resources in the most literal and monstrous way. What’s worse, I don’t think my side is any better than Dracogenics. Sure, the bad guys use the lower classes of the city as replacement meatsuits for the ultra-rich, but is my company any better for snagging people off the street, dressing them up like they are in a Daft Punk video, and sending them into battle? Probably not. Nevertheless, 5 Lives is spot on in producing a sense of place within the city. The future depicted in Satellite Reign is a visual feast, but I wouldn’t want to live there.

I take issue with only two elements in the game. The first is that the AI driving the police and corporate security can be a little erratic. There are moments when I’ve exercised the better part of valour during a shooting spree only to find the police more interested in shooting each other than running me to ground. The game also has some odd rules when it comes to single-shot stealth kills. From my point of view, it seems like an oversight that a both a silenced pistol and a silenced sniper rifle require close-quarters combat for a stealth kill.

Overall, there is plenty to see and do in Satellite Reign. Though it is an obvious love letter to Syndicate, Satellite Reign drags the isometric view and associated corporate wet work into the twenty-first century. Even if the ultimate objective of the game doesn’t change from one play-through to the next, there’s suitable variety built into the map of the city, the agents’ skill trees, and the potential combinations of weapons and augments to keep players coming back for more. The occasional bug in the game is far from game breaking and easily addressed in a patch. For the RTS fan up for urban carnage, Satellite Reign is an obvious choice.