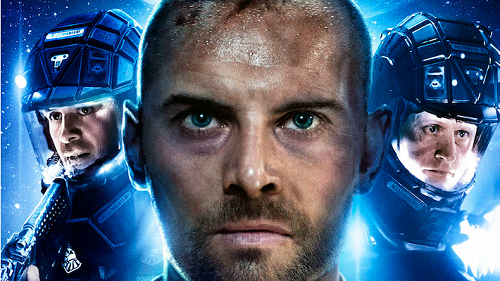 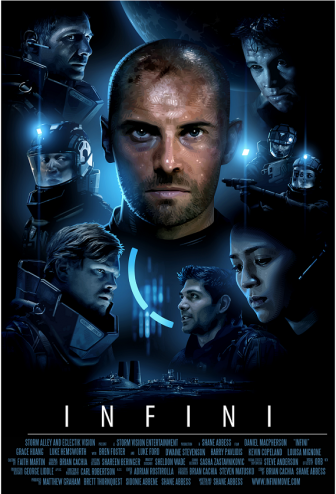 Someone I follow on twitter recently quipped that the science fiction section of Netflix is a lot like the lone sci-fi shelf at Blockbuster in the 90s: there are ten movies that you’ve heard of, and the rest of the selection is low-to-mid budget crap.

Though my base instinct is to drop a deuce on Infini, it’s far from the worst movie I’ve ever seen. In fact, I admire its attempt at being both science fiction and horror. The acting is capable, though much of the dialogue is as bland as a Keynesian’s essay on deficit spending. I may have even liked this movie, were it not for the fact that I live in a universe where The Thing and Event Horizon exist. It’s not just that I’ve seen this movie before; I’ve seen done better before, and that’s a hard thing for any movie to measure up against.

Directed and written by Shane Abbess, Infini is a story about a deep space search and rescue team (stop me if you’ve heard this one before). After arriving on the space station Infini, the crew finds a lone survivor and a kind of alien life that drives humans into a killing frenzy (no, really, stop me if you’ve heard this one). The movie stars a band of Australian actors, none of whom are particular remarkable in their performance, and Luke Hemsworth, who has probably spent most of his professional career being referred to as “that other Hemsworth.”

What really stands out about this movie is the way it feels like something that wanted to be one story but turned into another through the magic of revisions and rewrites. The first act makes a big deal of the lousy economy of the 23rd century. It’s an economy so bad, citing 95% of the Earth’s population living below the poverty line, it strains suspension of disbelief right out of the gate. These dire economic straits motivate people to take high-risk jobs in space using a digitization and teleportation technology called slipstream.

Credit where credit is due, the opening scene effortlessly sells slipstream as the story’s central point. The sales pitch is so good I was willing to forgive the impossible economics of the future. Wave one of expendable extras illustrate the danger of slipstream through the necessity of invasive medical examinations. The second wave talks about soldiers using “dirty” slipstream jumps for their own ends. All of these concepts struck this critic as reasonably interesting. Once the story finally gets under way, they amount to absolute dick.

Slipstream, bad economies, and space soldiering are little more than set dressing for that most tired of archetypes, the dad who wants to do right by his wife and kid. Snore. The balance of the movie is straight-up survival horror with just a soupcon of madness, and a hint of space monsters. Again, it’s nothing awful, but it’s certainly nothing innovative. There’s no attempt to do something new with horror in space. In some ways, the movie plays it decidedly safe e.g. the set construction.

For some reason, the space station’s computers are running on MS-DOS. Ostensible protagonist Whit Carmichael (Daniel MacPherson), explains he’s reworked the station to operate with ASCII commands. Setting aside the fact that a computer in the 23rd century running on Dos makes about as  much sense as running Windows 3.1 on Charles Babbage’s difference engine, it also makes for a very mundane – if accessible – environment. Perhaps Mr. Abbess is trying to capture a retro-futuristic sensibility within his world, something akin to the Nostromo of Alien. Alas, Alien got there first and Infini’s design offers little wonder in its sense of place.

Despite all this, the movie ends on a reasonably interesting note. Once the survival story whittles down the cast of unremarkable human props to a single person, there’s a moment of humanity recognized in something alien. Nobody should mistake this revelation for Star Trek’s Utopian notion that we are all alien to each other. Nevertheless, it is an ounce of thoughtfulness in a movie which is otherwise a wholly paint by number affair. I wouldn’t say the ending redeems the movie, but it does offer a mild reward for an audience dedicated to sticking things out.

While Infini is not absent potential, it’s a light year away from living up to any of its greatness. It could have been good, it might have been original, yet it is neither. Though I won’t call it terrible, I can’t come up with any good reasons why people need to see this movie.