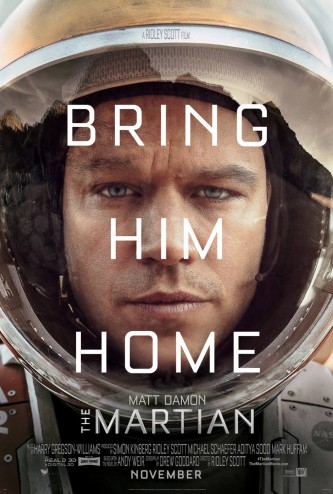 I often find myself talking about a movie’s potential. Does something live up to its potential? Did a given picture have any to begin with? When I first heard about The Martian, it struck me as a movie with a strong potential…to be completely god awful. Let’s review the facts.

Anybody who has watched a movie over the last twenty years knows that setting a story on Mars is a kiss of death. Matt Damon, though a capable actor, has been in some truly uninspiring roles of late. Similarly, Ridley Scott is just as likely to be abysmal as he is brilliant – leaning more toward the former than the latter. Pair this with an unartfully written self-published novel as the source material and anyone can be forgiven for sucking in an anxious breath when hearing about The Martian. When the time came for me to watch The Martian, all of its baggage (mostly labeled Prometheus, Interstellar, and Elysium) evaporated within the first five minutes.

The Martian delivers pretty much everything it promises in the trailer. Matt Damon plays astronaut Mark Watney. During a misadventure with a sandstorm of Mad Max proportions, Watney’s crew leaves him stranded on Mars. Therein, Damon’s character has to survive on a dead world while NASA and JPL figure out a way to rescue him from a distance of twelve light minutes. And how does our hero survive nearly two years isolated on the red planet, plagued with shortages of power, food, water, and air? Through science! Maybe not perfect science, but science that’s good enough for Kerbal Space Program, and if it’s good enough for KSP it’s good enough for you.

As the “stranded person” trope goes, The Martian thankfully leans more toward Apollo 13 than Castaway. This spares the audience watching Matt Damon embarking upon a slow descent into madness. Astronaut Watney’s video journals, which one might rightly assume to be part of a NASA mission to Mars, are more than narrative sign posts and short primers for those who don’t get the science of Mars. These near-violations of the fourth wall inject a bit of humanity into the character. And a lack of humanity is exactly why most other “hard science” space movies fail.

Writers and directors tend to get fixated on the idea of portraying astronauts as consummate professionals (notwithstanding Anne Hathaway in Interstellar, who is the worst astronaut ever). While this might be true to form, straight laced and squared jawed professionals make for really boring and really alienating movie characters. So when Mark Watney tells mission control to go fuck themselves, the character might be moving away from what’s appropriate for an astronaut, but the film is giving the audience what they need to form a rapport with their protagonist. In this moment, we see the very soul of The Martian, and it’s not science; it’s comedy.

Real astronauts aren’t funny; astronauts are triple PhD holding Air Force colonels with an IQ of 190. To wit, the astronaut is neither you nor I. We are not good enough to be astronauts. Mark Watney, however, isn’t beyond making a poop joke. Watney complains about disco. Watney likes Iron Man. As an audience, we can watch The Martian and see just a little bit of ourselves in Mark Watney. In this moment of recognition the movie finds its ability to play to a very broad audience.

And if all that isn’t enough for you, the Martian has a really strong supporting cast. Kristen Wiig nails it as NASA’s head of public relations. Donald Glover throws Community’s Troy Barnes on the trash heap, embracing a physics nerd who would put Sheldon Cooper to shame. Jeff Daniels still seems like he’s playing that guy from The Newsroom instead of the director of NASA, but his dialogue makes up for uninspired acting. The movie may be called The Martian but it is very much an ensemble production.

Everything comes together for The Martian. Mars is depicted as a foreboding but beautiful place. Matt Damon shows us an astronaut who successfully balances being professional with being human. Screenwriter Drew Goddard tones down the engineering focus in the source material to something that still feels authentic to the audience. And most importantly, Ridley Scott doesn’t muck everything up with an attempt to be overly self-important and introspective. The Martian is a near-future space rescue movie that is grounded in the problems of physics and congressional appropriations to NASA. It is as technical as it needs to be, conceding the laws of physics to cinematic convenience only when absolutely necessary. Dare I say, the curse of the Mars movie has been broken.