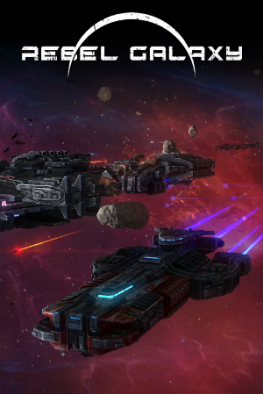 During the summer I had a chance to play with a preview build of Rebel Galaxy. Amid those halcyon days, I was coming off months of playing nothing but Elite Dangerous. Because of that, the slow moving, naval-inspired starship combat Rebel Galaxy stood out as an absolute delight. In its final form, Double Damage Games has only improved on their initial offering. They’ve produced a space-combat game with the sensibilities and scope of Wing Commander: Privateer and the tone of Firefly.

It’s hard to miss the gaming pedigree encoded in the very DNA of Rebel Galaxy. Travis Baldree and Erich Schaefer, the power behind Double Damage Games, previously founded Runic Games, which gave us the likes of Torchlight and Torchlight 2. Before Torchlight, Schaefer was lead designer on Diablo and Diablo 2. While Rebel Galaxy doesn’t boast the same hack/slash/loot aesthetic as Torchlight and Diablo, it does convey the same freedom to explore.

Rebel Galaxy’s story is reasonably typical of the open-world space combat genre. Players inherit a piece-of-crap ship from a mysterious relative – in this case, their Aunt Juno. The quest to find Juno leads to encounters with AIs, pirates, and the slightly less-than-upstanding forces of law and order. Without giving too much of the story away, I found it struck the exact right tone for this sort of experience. It captures the best feeling of old-school space opera, banking on a player’s willingness to suspend disbelief in the areas of extraterrestrial carbon-based life forms, FTL engines, and space battles that play out at extreme close range. Sufficed to say, the emphasis is most certainly on the fiction side of science fiction, but that’s just fine with this critic.

Though a person can engage with all the usual suspects of an open-world space game (e.g. mining, trading, cargo hauling) the real fun is found in the combat. Corvettes, frigates, destroyers, and other capital ships lay into each other with massive fusillades of energy weapons. Smaller turrets tend to blast away at the myriad of fighters and small attack craft that populate a battle. The combat is at once filled with urgency, but also slow and methodical. Killing another starship is as much about positioning and timing as it is disgorging hot tachyons at the enemy.

In terms of making money, trade and/or combat are the way to go, at least within my experience. Fetch quest cargo missions are okay, but who wants to be peaceful when they are flying a ship with fourteen broadside plasma cannons? It’s also fairly easy to build up to more impressive starships and better arsenals. Granted, a player will find it hard to go from one story mission to the next without ever stopping to do some work on the side. However, taking the time to hunt bounty or run freight is rarely so arduous as to feel like a grind.

On the subject of trading, I’ll give Double Damage kudos for having more in-game trade data available than what appears in Elite Dangerous. I’m always astonished at games that expect me to believe my computer can plot an FTL-jump but not remember how much I paid for 10 tons of self-sealing stembolts at the previous space station. Though the game could benefit from a bit more trade data, I don’t think anybody will need to have Excel running in the background to ensure they stay profitable.

The only real mark against the game was the odd bit of janky AI. This was particularly apparent on escort missions. Note my use of the past tense. However, Double Damage has proven to be incredibly responsive to feedback, releasing patches very quickly after issues are identified. Playing the game now is pretty much a seamless experience. No frame rate drops. No glitches. No crashes.

While Rebel Galaxy doesn’t reinvent the wheel in terms of the open-world space combat game, its strength is in its ability to skillfully borrow and fuse the things that do work from within the sub-genre. There’s a little bit of Privateer, mixed with a dash of Starfleet Command, with just a splash of Freelancer for good measure. Everything the game does, it does very well. For someone looking for a space game that will let them jump in and feel like Han Solo without twenty hours of prep work, Rebel Galaxy is a sound investment.

Note: I reviewed the PC version of this game using a mouse and keyboard.