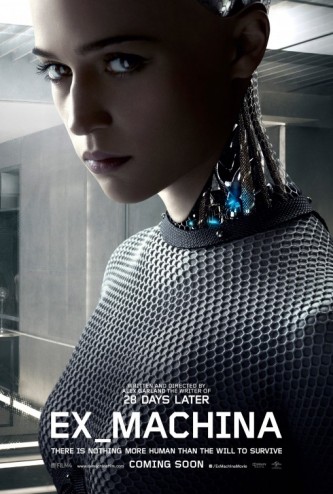 UPDATE: I missed the point of this movie.

I’m a white guy who works in economics and economic development. Much like the tech industry, my field can be a boys club. That means I suffer from a bit of myopia when it comes to a story that deals with the literal objectification of women within a given industry. I got this one wrong. I’ve taken this error and turned it into a 1200 word essay I’m pitching to a few websites and magazines. I want my mea culpa on this to be as public as I can make it. I’ll leave the original review below as a perpetual reminder that sometimes I need to think harder before putting pen to paper.

A film like Ex Machina is an inevitable sort of thing. There’s nothing particularly profound in asking what will happen when someone with the tech savvy and wealth of Mark Zuckerberg, for example, turns his attention toward creating an artificial general intelligence for puerile purposes. Nor do I think that the latest entry from writer/director Alex Garland is a particularly fresh take on the decades-old man versus machine story. Ex Machina orbits a done idea based on a half-baked concept: the thinking machine challenging its creator. Yet a lack of novelty does not preclude the film being a technically proficient experience and a reasonably engaging story, even if the ending is dull as it comes.

Ex Machina is, essentially, a more philosophically inclined take on Robocop’s formula of character transformation. Herein, a reclusive tech savant summons a programmer to his mountain fortress. The programmer’s task is to administer a modified Turing Test on a human-form the robot. Ava (Alicia Vikander), the robot, and Caleb (Domhnall Gleeson), the programmer, engage in a series of dialogues where the programmer tests the humanity of the machine.

Narrative and visual clues, alike, suggest Caleb’s interviews with Ava are part of some test within a test. The film invites its audience to speculate about the true subject of the study. To my surprise, Ex Machina is sufficiently nimble in its writing to keep a viewer guessing, at least up until the end of the second act. Still, its endurance is no small feat for a movie with only four characters and a handful of sets.

Once the gambit is revealed, Ex Machina’s ending is something of a cut cloth affair. The movie’s tone shifts from one of discovery to heavy handed moralizing. To wit, mad engineering (e.g. making something for the sake of making it) is irresponsible, particularly where sentient beings are concerned. Giving a sex robot a sense of self proves to be an act of gross over-engineering. The movie’s ultimate scene is wrapped in a ribbon of the watchmaker’s hubris. Narrative consistency precludes any mention of Asimov’s Three Laws, thus resulting in an ending that hasn’t been fresh since 1970’s Colossus: The Forbin Project.

What I find most disappointing is how the film invites the average viewer, or at least someone who reads/writes less science fiction than this critic, to view Ex Machina’s lessons profound revelations. Certainly there is room to see this film as an empowering feminist critique on the commoditization of the female form. It’s easy to imagine how Nathan aka Evil Zuckerberg would monetize some variation of his sex robot into a consumer model. At the same time, there’s a fundamental misalignment between the depiction of a genuine AI we see on screen, and the rather limited AI necessary for building a convincing sex bot. In other words, if a person wanted to make a sex robot, they wouldn’t make something as smart as a Cylon. All they need is something that can convince its user it enjoys butt stuff as modus vivendi.

Ava may defy convention, existing as a princess-who-rescues-herself, but she only does so through the lens of a decades old technophobia. I expect more from science fiction of this day and age. It’s time to move past the fear of how machines might usurp and supplant humanity. This said, Ex Machina is sufficiently well-polished to rise above its rather limited imagination. There’s enough misdirection in the story’s first two-thirds to keep a viewer off balance, right up until the point where it goes reducto ad HAL 9000 in the third act.